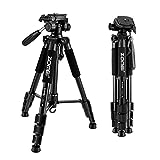 The tripod and its core tasks

Tripods are available in numerous designs and for a wide variety of tasks. The best-known applications are certainly in the fields of photography and film technology, but also for headlights, microphones and measuring instruments, these tools are used regularly. The essential function of a tripod is to allow the attached technical device a certain position and to maintain this stable. For most tripod models, the height can vary significantly and over the tripod headthe device can be finally adjusted and locked in all degrees of freedom. For working with film or video cameras, one usually uses more stable tripod heads which are also provided with damping elements in order to be able to perform the pivoting and tilting during recording evenly and without jerking. Depending on the size, weight, center of gravity and function of the technical devices, the tripods must be designed accordingly large and stable. The most common basic concept is the frame with three legs, because the easiest way to stabilize it on an uneven surface. These legs are extensible on most models using a telescopic technique, so that during transport the maximum length does not have to be moved and stowed. On the other hand suffers by these adjustment but also the stability, so that the tripod constructions often very massive and difficult, which can be very cumbersome while traveling and especially on vacation trips. For this, and especially for cameras and light video cameras, handy travel tripods have been developed, which of course involve some compromises, but still offer many advantages.

Sooner or later, every hobby photographer and videographer will be faced with the problem of which tripod solution to use in his baggage or on the road backpackwants to take. It should be noted that it is a fully functional travel tripod for filming does not really exist. Thus, these lightweights are limited to a static and stable position, but in many cases already bring about significant improvements. When taking pictures, for example, own portraits, animal shots and long exposures and filming shake-free shots are the better choice anyway. Because at one travel tripod Of course, weight, size, carrying capacity and the functions play a major role, this is highly recommended before buying a detailed research. Every interested tourist should have a clear idea of ​​what he wants to record on the way with which equipment.

Travel tripods come in many forms

The small tripods with a ball head, also called table stands, are a good choice for smartphones and lightweight compact cameras, with the standardized ¼ „thread take-up.

a) Manfrotto MTPIXI-B PIXI. The table standis 18 cm long when transported, weighs only 190 grams and yet securely holds devices weighing up to 1 kilogram in the set position.

b) Cullmann Magnesit Copter Multistative CB2.7. This model is a bit more robust, 22 cm long, 250 grams heavy and also suitable for camera weights up to 1 kilogram.

a) Rollei Compact Traveler Mini M-1. On travel tripod with an interesting pack size of 15 cm and professional workmanship. Although it weighs 800 grams, but it has a variable height to 41 cm, has one spirit leveland can stably position cameras weighing up to 3 kilograms.

b) Velbon EX-Macro Tripod, With a tripod head like the big models this cheap travel version shines. Turning and tilting with a handle works quite handy and the removable plate is locked with an eccentric clamping lever. The pack size is 28 cm and the weight is just under 600 grams. As a highlight you can with this Mini tripoduse his 3 kg camera in a maximum height of 56 cm.

c) Carbon Tripod K & F KF09.010. This travel tripod impresses with a high-quality and very light aluminum-carbon construction. With a transport length of 47 cm and a weight of 1500 grams, the tripod is no longer a mini version, but also offers corresponding functions. The load capacity is designed for a maximum of 12 kilograms and the maximum height ends only at 1.68 meters.

Another popular tripod version for on the go are the models for clamping or for flexible fixings. This can be used as a base for a variety of objects, such as railings, posts, fences, trees, tables and chairs. practical traveling companionare u.a .:

a) Joby GP1-BGEU Original Gorillapod. With this lightweight mini tripod you only charge your backpack with an additional 45 grams and still be able to position cameras weighing up to 325 grams. The flexible leg joints can be brought in many different forms and attach to numerous objects or hang.

b) Rollei Clampod Set 22560. This extraordinary and very functional travel tripod weighs only 210 grams and can also be used as a normal table stand. The carrying capacity of the ball head is 3 kilograms and the main function of this stand are its clamping options. Both on round and square profiles as well as on thin and thick tabletops, this construction can be securely fastened.