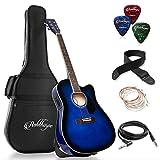 For musicians, the reinforcement of an acoustic guitar on stage has long been associated with problems. Microphones reduced the freedom of movement and quickly created unpleasant feedback, while pick-ups from guitars led to an unnatural sound result.

From the pick-up to the piezoelectric transducer

The first company to use transducers instead of pickups was Ovation. Transducers are energy converters. Electroacoustic guitars integrate crystals into a pickup on the bridge. These transform the vibrations of the strings and the blanketinto a signal. A small preamplifier amplifies the signal that has an output to the amplifieror a recording device is forwarded.

While in a magnetic coil of a pickup only the vibrations of the strings in the magnetic field generate the signal, piezoelectric pickups respond to mechanical movements of strings and blanket. This creates a sound with an acoustic character. Another advantage is that piezoelectric pickups are also suitable for amplifying acoustic guitars with nylon strings.

Depending on the instrument, design and desired sound, the preamps are equipped with various features. In the case of fully acoustic instruments with a piezoelectric pickup, it is only possible to control the tone and volume. The goal is to get the most authentic acoustic sound possible on stage. In order to be able to better adapt the tone spectrum to the desired sound, many preamps have an equalizer with which certain frequency ranges can be raised or lowered.

Some models also have a notch filter. With it, defined frequencies can be completely removed with a thin and deep cut, for example, to completely remove feedback or hum. Some preamps are also equipped with a chorus effect. It generates a time-delayed second signal parallel to the output signal. This leads to deliberate periodic pitch variations, reminiscent of the sound of a 12-string guitar. An equally popular feature is the built-in tuner,

However, if you want to buy an electro-acoustic guitar, you should first and foremost orientate yourself to the sound of the instrument and the pickup, since effects can also be connected later with external devices. To put it simply, there are electro-acoustic guitars that can also be played unamplified and have only been equipped with a pickup for the stage. They also have a very natural sound, usually a pick-up system that reproduces this sound. To prevent such guitars from generating high-volume feedback, the soundhole can be closed with a rubber cover.

There are also electro-acoustic guitars designed primarily for use with amps or PA. They usually have a thin or solid body, which allows use of the guitars at high volumes, without it comes to a feedback. Acoustically, these instruments usually sound a bit sterile and, because of the small volume of the cabinet, are quieter than fully acoustic instruments.

The company Ovation developed guitars, whose body consists of a rounded fiberglass basin. This completely prevents feedback and guarantees that the signal is generated solely by the natural vibration of the ceiling and the strings.

It is therefore advisable to always test an electroacoustic guitar together with a suitable amplifier in order to ensure that the sound matches your own ideas and matches the music style. Today there are amplifiers, which were developed especially for the reinforcement of acoustic guitars. They have a very clear signal and can not overdrive even at high volumes.

Beginner models are already available from about 120 euros. Good instruments cost between 400 and 800 euros, while exclusive models can cost 4000 to 5000 euros. Cheap instruments today are mostly from China or Korea, while expensive branded instruments are made by traditional manufacturers in the US and Europe.

As with any acoustic guitar, in addition to the acceptance system, the woods used, the processing, the playability and the sound are important criteria that should be considered when buying. It is also possible to equip a guitar later with a piezoelectric pickup. Depending on the system and type of guitar, the installation can be done by yourself or by a specialist.