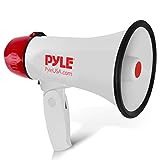 In certain situations, the voice of a human does not suffice with its natural volume, does not get far and does not have sufficient hearing. Whether in the midst of a larger collection of people, an environment with a strong background noise or over longer distances, so that the voice of a person, various sounds or sounds clearly and noticeably emphasize on a certain range, it requires special tools, such as megaphone , For many different uses that has megaphone a beneficial, high or even all-important benefit and presents itself in different models with impressive performance and practical additional functions.

Megaphone – the characteristics and evolution of the mouthpiece

The megaphone is today a handy open mouthpiece in a hyperbolic cone or funnel shape made of metal, which directs the propagation of sound in a particular direction, amplifies the sounds and increases the volume. As a result, the spoken word, as well as sounds and sounds of various kinds, are much louder and, in particular, much further away than in the immediate vicinity.

The principle of sound generation to emphasize the voice, for signal transmission or for music presentation has been known for several thousand years and can be found in history, for example, in bugles, such as the Hifthorn, Posthorn, Nebelhorn, Olifant ivory or the Roman Cornu, which commands transmitted as sound signals into the battlefield. Wind instruments were used in many cultures on the earthMade of a variety of materials, such as animal horn, snail shell, shell, metal or wood and used as a musical instrument as well as a signaling instrument, which transmitted important messages or messages by means of acoustic signals.

For vocal and far-reaching transmission of the spoken word, the mouthpiece was first developed in the 17th century by inventors and scientists, such as. For example, the Englishman „Samuel Morland,“ who invented the „Speech Trumpet“ in 1670 or the French priest and inventor „Laurent Cassegrain,“ who gave the funnel-shaped mouthpiece an optimized hyperbolic shape. The term „megaphone“ appeared for the first time in the 19th century in connection with the inventor Thomas Edison, who developed in 1878 a device that was similar to the mouthpiece in its function. With the mouthpiece of Edison a soft whisper could be heard at a distance of a thousand yards, while a normal voice could be heard at about three kilometers. However, Edison’s mouthpiece was extremely large. In the 1960s, the electric variant increasingly replaced the previously used acoustic mouthpiece.

The modern mouthpiece presents itself in the present time predominantly as electrical megaphone with innovative technology that includes an electric voice amplifier microphone. amplifierand speakerand depending on the model also has various optional extras. The actual voice tube is built on the voice amplifier.

Types of megaphones and mouthpieces in general

Speech tubes in general and megaphones in particular are differentiated according to different species. The design distinguishes between open and closed mouthpieces. The closed mouthpiece is also referred to as a communication tube and is different than that megaphone not funnel-shaped, but tubular, uniformly wide and, above all, relatively long, since the tube must reach all the way to the listener in order to understand something at the target point. Such communication tubes are used as a voice link between two distant rooms and mainly on ships.

The open variant is the megaphone. As a funnel-shaped mouthpiece, it has an opening at both ends. The small opening is held in front of the mouth and serves to speak in, while the large opening is directed to the listener. The megaphone is colloquially called „whispering bag“. This instrument is available as a mobile and a stationary version. Widely used is the mobile model, which is held comfortably in the hand as a handheld megaphone and can be taken anywhere. Stationary megaphones, for example, are permanently installed at railway stations to announce timetable changes and act as loudspeakers.

Function, performance and features of megaphones

In particular, mobile handheld iPhone are very popular and widely used due to their multiple use and comfortable handling. In function, the electric megaphone is extremely simple. Turn on, speak in and according to the settings, the voice sound loud and far. There are different devices with different performances.

In terms of volume, the voice in Germany may be amplified to a maximum of 120 decibels (dB), as this is the acoustic threshold of pain in humans and to prevent hearing damage. Accordingly, the megaphones are also equipped for this output. As a rule, the volume of mobile megaphones is variably adjustable in different stages. Likewise, the open electrical mouthpieces differ in wattage, depending on the model z. B. can range from 10 watts to 80 watts. In addition to the volume of megaphones above all the range plays a crucial role. Depending on the performance of the model, the range may be a few hundred meters or even two kilometers. High-quality models have a clear, undistorted, noise-free and pleasant sound quality. Electrically powered handheld megaphones usually work with batteries,

The comfort leaves nothing to be desired with modern devices. Mobile Handmegaphone have a pleasant and often ergonomic shaped handle and usually also a strap so that the megaphone can be easily hung around the shoulder when not in use. For talking in, the megaphone does not necessarily have to be held shut, because many models can be connected to a handheld microphone, so that the device can also be stored during the announcement or held by another person.

The modern megaphone acts as the traditional or historic signal horns for the transmission of warning signals or protection signals. Thus, some models allow not only the vocal and far-reaching transmission of spoken announcements, but also of signals and alarm sounds, such as sirens in various unmistakable sounds.

Thanks to innovative technology, a megaphone can have various additional functions and practical features. This includes, among other things, the recording function, the playback function, the storage of music, connections for data carriers, such as USB sticks or SD slots, as well as integrated ones MP3 player, The possibilities of additional equipment open up completely new perspectives regarding the use of a megaphone. So can be on the open mobile mouthpiece z. B. also easily play music or a ready-made announcement.

The megaphone in action – which model is the right one?

The application options are very diverse for a megaphone. Suitable mobile megaphones are especially for mass events, such as rallies, demonstrations, various public events, sporting events (eg football games) or festivals, but also for presentations at stalls or at exhibitions and fairs. For warning, orientation and help megaphones z. As in operations on construction sites or in disaster areas, as well as the security and rescue services on beaches. Even in the private sector, the megaphone can be used many times, such. For example, at a birthday party, garden party or for speeches and speeches at large wedding celebrations with many guests in a large hall or in an outdoor space. Depending on the intended use or which uses a megaphone is required, the model should be selected according to the required performance, range, manageability and the range of functions and equipment. Whether making announcements or speeches, transmitting important in
formation, warnings or signals, to cheer on football events or to play and transfer music, there is the right megaphone in demanding quality for every application and space.